Ah, traveling as a vegan… By now you have surely realized that I love food and travel equally, and there’s not much I like more than finding vegan food in new and unfamiliar destinations. That has not changed on my recent trip to Sofia, the capital of Bulgaria
​Sofia is a pretty vegan-friendly city where I was even able to find vegan snacks (cookies and crackers) in the supermarket, something that’s not at all the case here in neighboring Greece. On top of that, German drug store chain DM has a presence in Bulgaria, and they also offer organic and vegan foods and drinks. This is, of course, a great base to have for a vegan traveler. But it didn’t stop there.

Delicious supermarket snacks.
The first restaurant I went to in Sofia was really close to my Airbnb and was a fully vegan place called Mix of Figs. The reviews on HappyCow were a bit mixed so I wasn’t sure what to expect. I went to Mix of Figs Saturday afternoon and even though it was still supposed to be open for several more hours, the atmosphere made me feel like it was about to close. There were rather few items on display to choose from, and aside from one couple, it was completely empty. I decided I’d have the veggie burger with buckwheat bread, a chickpea patty, and tabbouleh, and what I got was more like a sandwich than a burger as the buckwheat bread really came in the form of bread slices, nothing like a bun. I was happy that the burger was cold though, as I don’t eat warm lunches during the summer. The burger was pretty decent, but nothing special. For dessert I had the chocolate mousse which was absolutely delicious. I’d never had a vegan mousse up until then and was really impressed with how flavorful it was. I wouldn’t call it a mousse, however, as the texture was more like a pudding. I was surprised when my bill only came down to 6 leva which is about 3 euros – for a main course and a dessert! Bulgaria really is one of the cheapest places in Europe, even for vegans.
Neofit Rilski Street 10. Open Monday to Saturday 10am to 8:30pm. http://mixofigs.bg/index.php/bg/

Chocolate mousse
For dinner that night, I decided to try out an all-vegan restaurant called Soul Kitchen. The name attracted me because of the 2013 Fatih Akin movie (do check it out if you haven’t already). Getting to Soul Kitchen took a bit of walking, and it was a tad difficult to find it because I followed the directions on Google Maps which turned out to be wrong. I wasn’t a big fan of the area as it was rather empty, and I’m not comfortable in empty streets and neighborhoods. As soon as I reached the restaurant though I really loved it. The music beautifully matched the name with Erykah Badu playing the whole time I was there which was a major plus for me (vegan food and great music!). I sat in the backyard which was really beautiful. Soul Kitchen gave off the vibe of a slightly more upscale place, and the prices reflect that, even though they’re still average by European standards. I decided I’d have the flattop veggies which were grilled vegetables (potatoes, asparagus, peppers, zucchini, lettuce, carrots, radish, celery) with chimichurri sauce. The presentation was very pretty and added to the whole atmosphere. It was a very flavorful dish and to be honest the first time I had ever heard of chimichurri. It’s always great to find out about new dishes (or sauces, dips, etc.), and I’ll definitely need to recreate the sauce. Soul Kitchen is really worth venturing slightly out of the city center for as the atmosphere was by far the best I experienced in Sofia (even the bill was presented in a box with dried flowers, how cute is that?!).
Kokiche Street 13. Open Monday to Sunday 11am to 11pm. http://soulkitchen.bg/en

Flattop veggies
The next day, sadly, it rained pretty much all day and the temperature dropped significantly. From 37°C on Saturday, it went down to 18°C on Sunday. Having only sandals and a sleeveless dress with me, I needed to spend the day inside. What better place to go for lunch in such conditions than a tea house called Veda House?! Veda House is very centrally located and while the name suggests strong ties to India (and indeed, they offer Ayurvedic teas and Asian-inspired dishes) is part of a tea culture that Bulgaria shares with Romania (check out my vegan guide to Bucharest, to read about a quaint little place there called Bohemia Tea House). Veda House is by far not the only tea house in Sofia, but I didn’t have a chance to visit any of the others, sadly. As I said, they offer Ayurvedic (and other) teas, but they also have a decent vegetarian menu including several vegan dishes. I chose one of the Ayurvedic teas and the veggie tofu which included okra, broccoli, and peppers, as well as a bit of chili, sesame, cashews, and ginger. The food was really good and filling, and Veda House was the perfect place to stay warm. There’s a lovely seating area upstairs with pillows, but as I was wearing a dress I stayed downstairs on a regular table with chairs.
Since I really liked Veda House and some other places I wanted to go to were closed when I visited, I decided to pay Veda House a second visit the next day with much better weather. The warmer temperature and sunshine allowed me to sit outside and have a chia, banana, and strawberry smoothie. For lunch, I had the seitan with quinoa and vegetables which was just as great as the tofu with vegetables. I don’t usually make seitan, but this dish was so yummy that I decided it’s time to make use of seitan more frequently.
Gladstone Street 2. Open Monday to Sunday 10:30am to 10:30pm.

Ayurvedic tea and tofu with vegetables

Smoothie and seitan with vegetables and quinoa
On Sunday and Monday, I had dinner at the same place which was just around the corner. Sun Moon (“Слънце Луна” in Bulgarian) has several outlets, but as this one was really close to my Airbnb, I decided to go there twice. While it’s also a bakery, I didn’t manage to buy any of their breads, but the ones I saw on display looked really good and healthy. Sun Moon is a vegetarian place, but they are able to veganize many of their dishes. What is different about Sun Moon is that they have a Bulgarian section on the menu which is great for people who want a taste of authentic Bulgarian cuisine without animal cruelty.
What I noticed about Sun Moon is that it was a bit chaotic: I was first seated in a room which ended up not having lights, so I had to move from the bakery to the restaurant. After a while, I was then told that the kitchen would be closing sooner so I felt a bit rushed when I made my order and even when I ate my meal (the vegan version of their St. George’s Tempeh). However, the service was excellent, and the food was truly delicious and authentic (my father was both a chef and from Bulgaria, so I would say I can judge Bulgarian food pretty well). It came with mushroom rice and a nice salad and was very filling. To people not used to Bulgarian food, the dish may be a bit too oily, and some French tourists even found it too salty, but if you’re used to Balkan food you’ll love being able to taste familiar food made vegan. I ordered one of the sweets that were available in the bakery and took it home with me to eat the next day, and it was absolutely scrumptious. I forgot to write down the ingredients, but I believe it was called “Love Triangle” so look out for that if you ever find yourself at Sun Moon.
The next day, the service was not good at all with me being ignored for extended periods of time, but this was restricted to one specific waiter, and one of his female colleagues noticed this and apologized. As they were out of the burger that I was going to order, I decided to simply go for the vegan St. George’s Tempeh again. After all, it was really tasty and I knew I wouldn’t be able to have it again as I was about to travel back home the next day. As with the seitan from Veda House, this dish made me realize that I should use tempeh in my cooking to be able to diversify my food a bit more.
Gladstone Street 18. Open Monday to Saturday 8am to 10pm, Sunday 10am to 9pm.

Veganized St. George’s Tempeh with salad presented differently
Sadly, I didn’t find any breakfast places which is something that I really miss after the amazing vegan breakfast I got to enjoy in Hamburg. I guess, Sun Moon would have had some breakfast options, but I didn’t really get around to going that early.

Overall, Sofia is not exactly a vegan paradise, but for Balkan standards I’d say it has quite a decent amount of options. As it’s a pretty cheap city as well you could even splurge and get some really high quality meals here for the same amount of money that a vegan burger might cost you in Western Europe.

Have you been to the Balkan region as a vegan? Have you tried any vegan or veganized Balkan dishes?

How to Deal With Non-Vegan Money 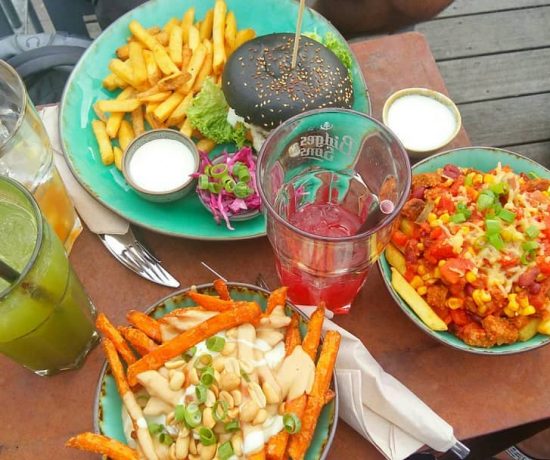