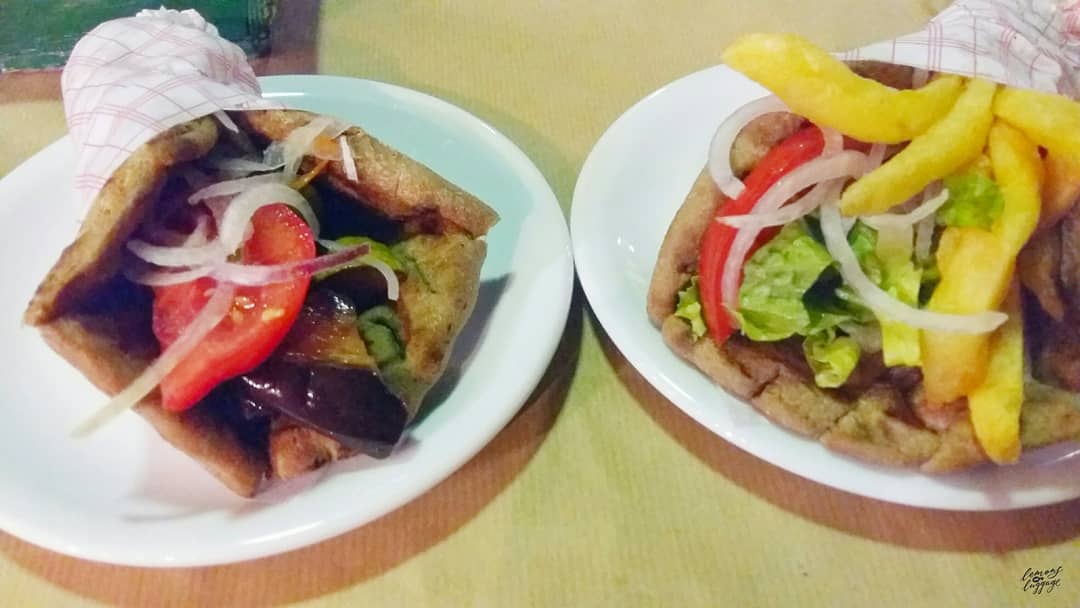 As you know, I spent the early summer days relaxing in Kalamata. Of course, I also had to fuel myself with some delicious vegan food in Kalamata.

I’ve mentioned before that vegan food can be tricky to get by in Greece, so I didn’t expect all that much when I planned my trip to this small Greek town. We booked an Airbnb with a kitchenette so we would at least be able to make salads for lunch and cereal for breakfast.

However, luckily, there were also a few other vegan options in Kalamata – enough in fact to make a list of places for anyone else looking for vegan food in Kalamata.

The Best Spots for Vegan Food in Kalamata

Souvlaki is the most popular Greek fast food, and some places offer vegan variations nowadays. After checking with the only waitress who seemed to be knowledgeable about veganism at a place called Ladolemono, we found out they had two vegan souvlaki options and even a vegan burger (which Alfonso happily devoured). For the souvlaki, you can either get the grilled vegetable option or the basic one with fries. (If you spend more time in Greece and are looking for the best vegan souvlaki check out my vegan Athens guide!)

I know not everyone gets why we tend to eat out so much, but there’s something about sitting outdoors with a nice meal and watching people walk by. Along with travel, it’s one of my favorite things to do.

Both souvlaki varieties were delicious, and we figured we’d take some along with us on our way back home, but this time Ladolemono let us down. Despite specifying very clearly that we were vegan and did not want tzatziki we noticed later on in the car that there was tzatziki in our meals. If you plan on getting any takeaway make sure to at least have a look to be certain it’s actually vegan!
Ypapantis 3. Open Monday to Sunday 12 pm to 2 am.

For Greek slow food the Thiasos mezedopoleio just around the corner from Ladolemono is a good option. Again, you have to explain very clearly (preferably in Greek) which ingredients you don’t eat. Once that’s been made clear, however, the waiter should be able to name you a few vegan starters.

We ended up with a fairly big list of choices – and ordered them all! We had bread with dips such as fava beans and skordalia (mashed garlic and potatoes), grilled hot peppers, salad, and, my favorite, stuffed zucchini flowers. You won’t be this lucky at every traditional Greek restaurant, sometimes salad or fava and fries may be your only options. (Check out my extensive guide to finding vegan food in Greece.) So we were extremely happy to get enough choices for a filling dinner. And when all this good vegan food is accompanied by traditional Greek music you are definitely making the most of your vacation in Greece.
Ypapantis 7. Open Tuesday to Sunday 8 am to 1 am.

Our highlight for vegan food in Kalamata was a place called Family Donuts.

Often, when we walk past a place, I tell Alfonso we should check for vegan options. He usually thinks I’m not quite right in the head, and most of the time, he has every reason to. However, this time we were informed that the dough for the donuts is vegan. Because most of the toppings and fillings are not vegan there still wasn’t much choice for us, but there was a total of four vegan toppings/fillings (two varieties of cinnamon, apple, and raisin).

If you know me I love cinnamon so two types of vegan cinnamon donuts are more than enough to make me happy. On top of that, the staff here were so friendly that we couldn’t help but come back!
Plateia 23is Martiou 32. Open Monday to Saturday 9 am to 10 pm, Sunday 9:30 am to 10 pm.

What I Look Forward To

I was excited to find out that Kalamata now has it’s own vegan mini market called Just Vegan. As there isn’t otherwise that much vegan food in Kalamata this is great for self-catering. I’ll definitely stop by here on my next trip to the town. Iroon Polytechnio. Open Monday to Saturday 9 am to 2 pm, Tuesday, Thursday, and Friday also 5:30 pm to 8:30 pm.

All in all, you can find decent vegan food in Kalamata! I still believe finding accommodation with a kitchen is your best bet because it means you can make more versatile dishes and won’t be stuck with these options. Kalamata has a rather big Sklavenitis supermarket which even carries vegan mayonnaise and ice cream. There are certainly more difficult towns in Greece for vegans.

Have you ever been to Kalamata? Was it difficult for you to find vegan food there?