Vegan Bratislava Guide: The 10 Best Spots You Have to Visit 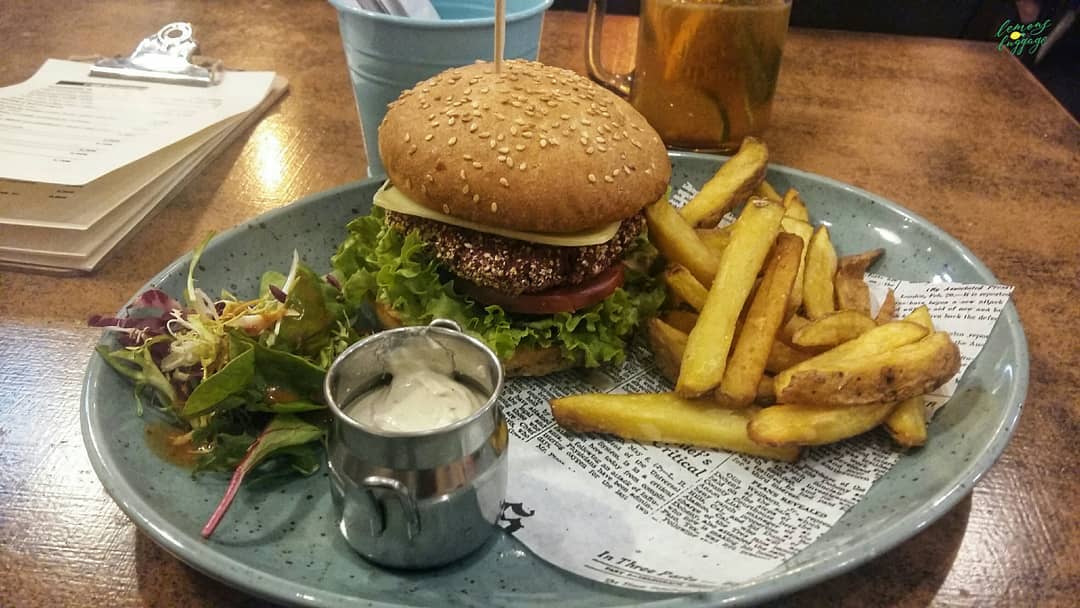 I have found that some Eastern European countries are extremely vegan-friendly. The passion for anything new and exciting is particularly big here, and that seems to include vegan food.

If you’ve read my vegan travel guides to Krakow and Budapest you’ll know that I’ve had some extraordinary vegan food in Eastern Europe. However, with Slovakia being a fairly small country, I didn’t have very high expectations of the vegan Bratislava food scene. Luckily, the city’s vegan spots far exceeded my expectations, and I had some fantastic vegan food. So let’s dive right into my vegan Bratislava guide!

Vegan fast food seems to be the one thing that every city with at least some vegan options has on hand. The day I arrived in Bratislava, I opted for this easy option and got a burger from a small stall called Vegan Kiosk. I chose the classic burger with cheese because I really like going for the basics. My idea is that if the regular burger is good I can always come back for a different one.

The burger was quite good but didn’t convince me to go back. What I really disliked, however, was that for a tiny burger stall the place was quite snobbish. Service was unfriendly and extremely slow, and these people coming in for an Instagram photoshoot were treated like royalty whereas regular people were being ignored.

If you’re hungry and want a quick bite it’s definitely an easy option, but there’s better food on this vegan Bratislava guide.

A place that I highly recommend is Fach Juice Shop which I already mentioned in my post on things to do in Bratislava. I really can’t explain to you how amazing this sandwich was, but I suppose the photo speaks for itself.

The bread was absolutely incredible, and the tomato was so juicy and delicious. As Fach Juice Shop is located right in the heart of Bratislava, you will pass by there several times, and I suggest you get a sandwich at least once. There’s also seating inside, but I arrived quite late and needed to get going.
Ventúrska 10. Open Monday to Friday 10 am to 6 pm.

Another fantastic place I have already mentioned is Balans Bistro. I actually tried going here twice, but the first time it was so full, and there was even a line outside so I figured I’d go back another time.

When I finally made it here, I ordered a lemonade with mint and coconut sugar and asked for dinner recommendations. The very friendly waitress suggested the Balans burger with fries, and I couldn’t have been more satisfied. The burger was so delicious and juicy, and the fries were fantastic. I loved the dipping sauce that came with them, so rich and flavorful.

Balans Bistro is a very cozy place, and everyone there was so friendly and down to earth. I absolutely recommend you have dinner here at least once. It’s definitely my favorite spot on this vegan Bratislava guide.
Jozefská 19. Open Monday to Friday 11 am to 9 pm, Saturday 1 pm to 9 pm, Sunday 1 pm to 8 pm.

I was really lucky with the weather in Bratislava and decided to try out a popsicle place called Marinela I had found on HappyCow. While the place was originally listed as being entirely vegan, I found out while I was there that only some of their choices are in fact vegan. I opted for the pineapple one, although it was difficult to choose with amazing options like raspberry and mango.

The flavor was so fresh and natural that I could easily tell that the popsicle was made from pure pineapple. I will still say that it was quite expensive which is why I didn’t go back a second time. I would recommend going once if the weather is good though. They do have a second location now as well.
Blumentalska 2731/6. Open Monday to Sunday 2 pm to 6:30 pm.

One of the highlights of my trip to Bratislava was a fully vegan and zero waste bakery and shop called U Dobrožrúta.

I went here for breakfast once to try a traditional Slovak custard roll and some tea. While it wasn’t the most delicious thing I had in Bratislava, I also took a banana bread to go which was absolutely delicious.

They had a bunch of yummy looking cakes and other sweets as well, but sadly, when I came back later, they were all out. I did buy a loaf of bread, however, which, along with some spreads from the drug store, served as breakfast for the remainder of my trip.

The store was lovely and had a ton of zero waste products. Unfortunately for me, the descriptions were in Slovak only, but you can ask the very friendly staff for help if you need anything.
While U Dobrožrúta is not in an area otherwise of interest to tourists, I suggest you go there at least once during your stay and enjoy the cozy and peaceful atmosphere.
Radlinského 27. Open Monday to Friday 8 am to 3 pm.

Made with Laf had two locations in Bratislava when I was there. This review concerns their main location which has sadly closed down. But since there is still another location I’m leaving this up.

I will say that the food was a bit hit and miss. I didn’t much care for the “Turkish” wrap they recommended to me the first time, though it wasn’t particularly bad either.

However, they really outdid themselves with the fish and chips the second time I came here. I cannot put into words how delicious this dish was. The “fish” was made of celery which is probably the last thing any of us would think of, but it worked so well.

Now, I’ve never had authentic fish and chips and haven’t eaten real fish in almost 20 years so I cannot guarantee that this tastes like the real deal. I simply loved the taste and texture of it, and I think it’s high time vegan chefs came up with better ideas than soy or seitan meat replacements.

The final spot for vegan food in Bratislava is Foodstock which offers Asian food. Now, while you may not be traveling to Bratislava to try Asian food, it’s always nice to have different options.

I had the Miso XL soup here, and let’s just say, it was XL indeed. They added tofu to it which made it filling enough to keep exploring the city after lunch. The tofu was deliciously crispy (nothing is worse than saggy tofu!) and the whole soup was rich in flavors although it wasn’t even expensive.

Foodstock is right in the heart of the historic center of Bratislava so you will pass by here several times. It also has far better opening hours than any other vegan place in Bratislava. Make sure you eat here at least once.
Klobučnícka 485/6. Open Monday to Saturday 11 am to 10 pm, Sunday 11 am to 8 pm.

I really fell in love with Bratislava so I hope to go back someday. Here are some places I really want to try next time.

BEMBA rawfood & plant-based: I’m not the biggest fan of raw food, but the photos I’ve seen of the food at this Bratislava vegan restaurant are outstanding. This explains why BEMBA is one of the best-rated places on this Bratislava vegan guide. Kollarovi namestie 17. Open Monday to Sunday 10 am to 8:30 pm.

Loove by Vegana: This Bratislava vegan restaurant only opened in late 2019 so I couldn’t add it to this vegan Bratislava guide right after my trip. They offer salads, pasta, pizza, and burgers, but also veganized Slovak dishes! Plynarenska 3. Open Monday to Friday 11 am to 7 pm, Saturday and Sunday 12 pm to 7 pm.

Vegan Om: This place is located inside a market and offers vegan fast food. The reviews are excellent so let me know if you’ve been. Rožňavská 1. Open Monday to Saturday 8 am to 7 pm.

FoodVegan: This vegan store only opened in 2020 so anyone who prefers to self-cater should check them out. Suché Mýto 6. Open Monday to Friday 9 am to 6 pm.

Overall, it’s easy to find vegan food in Bratislava, Slovakia. There are some absolutely exciting options in this underrated city. I’m a bit disappointed that I didn’t get to try more traditional vegan foods, but Bratislava absolutely made up for it with the variety of vegan options.

Have you ever been to Bratislava as a vegan? What did I miss on this vegan Bratislava guide?