18 Top Things to Do in Budapest 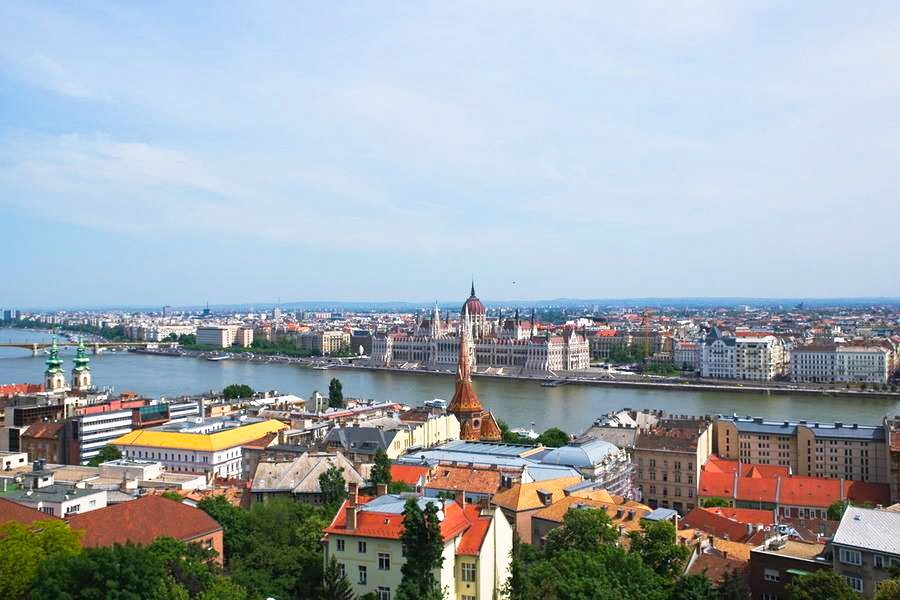 It’s been way too long, so I think I should jump right back in with a post on my recent trip to Budapest, the capital of Hungary. I’ve been asked for suggestions and compiled a list of the 18 top things to do in Budapest. Of course, we all have different interests, so these are only some of the things I liked. Feel free to skip some of them and do something else instead. The most populous city on the Danube river has an abundance of experiences to offer. (Another one of my favorite cities on the Danube is Bratislava.)

And of course, aside from this list of top things to do in Budapest, I’ve also got you covered if you’re looking for the best vegan food in Budapest.

The Absolute Top Things to Do in Budapest

1. Stroll along the Danube Promenade

​The banks of the Danube river are part of the UNESCO World Heritage site Budapest which means you don’t want to miss the Danube Promenade. From here you can also see many of Budapest’s best sights, such as the Hungarian Parliament.

Built in the 19th century, the Hungarian Parliament building is Budapest’s most iconic building and the largest building in Hungary. The best way to reach it is to take a stroll down the banks of the Danube river which will lead you directly to this incredible construction. Make sure you look at it from both across the Danube river as well as up close to admire the picturesque details. It’s utterly beautiful.

3. Walk across the Chain Bridge

The Chain Bridge was the first permanent bridge to connect Buda and Pest, the two towns that make up Budapest. It was opened in 1849, entirely destroyed during the Second World War, and rebuilt in 1949. During your stay in Budapest, you will likely cross the bridge several times while moving between Buda and Pest.

​Buda Castle is a stunning baroque building, on the south tip of Castle Hill. If you walk up the hill for about 20 minutes, you will be rewarded with beautiful views of the city and many photo opportunities. Inside the castle, you can find out more about the history of Hungary’s capital in the Budapest History Museum.

5. ​Walk around in Castle Hill

Located above the city, Castle Hill is one of Budapest’s highlights with many of the buildings dating back several centuries. It may take you a full day to explore its winding cobblestone streets. This part of the city also contains many of Budapest’s must-visit attractions like Matthias Church, Fisherman’s Bastion, and Buda Castle.

6. ​Discover the Differences between Buda and Pest

​​Budapest used to be two separate towns that were divided by the Danube river. Although they are now one city, they nevertheless have quite distinct qualities: People appreciate Pest for its modern and eclectic character while Buda gets its magic from its traditional atmosphere. Make sure you take the time to explore both sides of the river because they are equally marvelous.

7. See the Shoes on the Danube Bank

​A reminder of the crimes that were perpetrated against the Jewish people during the Second World War, this memorial commemorates the lives of the innocent victims that were told to take off their shoes by the river before being shot. It is an emotional exhibit about something we should never forget. And because travel isn’t simply about having a good time I truly believe that seeing the shoes on the Danube bank is one of the top things to do in Budapest.

8. Enjoy the View from the Fisherman’s Bastion

The terrace of the Fisherman’s Bastion is located on Castle Hill and provides scenic panoramas of the Danube and Pest. The seven magnificent towers symbolize the seven Magyar tribes that settled the Carpathian Basin at the end of the 9th century, which eventually led to the establishment of Hungary.

A visit to the Fisherman’s Bastion is without a doubt one of the top things to do in Budapest, and it’s even better if you can go in the morning when nobody else is around.

​Budapest is the capital of public baths so, of course, visiting a public bath is one of the top things to do in Budapest.

I highly recommend the mysterious, 16th-century Király Baths, an excellent addition to the city by the Ottomans. They will be closed throughout 2020 for much-needed renovations so when they re-open make sure to head there for a truly authentic experience. There are multiple small pools with varying water temperatures as well as a hammam and two saunas. It’s possible to rent a towel from the friendly staff but be sure to bring your own bathing suit. Remember to remove your jewelry as the sulfur in the water may stain some metals.

​This 2.5km long island is the green heart of Budapest and a delightful park and public recreational area. It includes swimming pool complexes, a jogging trail, an open-air stage, a musical fountain, and several picnic spots. It’s amazingly calm here as there are no cars permitted on the island.

Relaxing on Margaret Island is definitely one of the top things to do in Budapest because you can recharge your batteries here for when you explore the rest of the city.

11. Walk up Gellért Hill to the Citadella

​After crossing the Danube into Buda via Elisabeth Bridge, follow the sets of stairs and pathways for a beautiful view over both Buda and Pest from the Citadella. The citadel was constructed in the 19th century at a significant strategic location to observe the whole capital. There is a market at the top where you’ll find Hungarian creations like wooden toys and handcrafted clothes. You will also see the iconic Liberty Statue which was built in 1947 to celebrate the Soviet liberation of the city. Go here in the early morning to avoid the many visitors.

The Dohány Street Synagogue is not only a beautiful building, it’s also the world’s second-biggest synagogue and houses the Jewish Museum. Make sure to bring a camera: Contrary to what you will read online it is allowed to take pictures and video. Unfortunately, we only had our cell phones with us due to some wrong information on the internet.

There are free tours in many languages. My tip if you’re bilingual would be to avoid the larger groups of English tours and join a smaller one in another language.

13. ​Visit the House of Terror

The House of Terror is a museum related to Hungary’s time under Nazi and Communist rule and concentrates on the secret police of both parties. It’s housed in the secret police’s former headquarters (which was also their torture site) and serves as a memorial to the victims.  It’s a really powerful and unusual museum where you can learn about the harsh circumstances in Hungary under the Communist and Nazi governments, although I have to say I preferred the Albanian equivalent in Tirana (the House of Leaves) which had a more subtle approach (check out my eight reasons to visit Tirana).

Still, educating yourself about Hungary’s past is one of the top things to do in Budapest if you want to go beyond the bars and baths.

​This impressive boulevard in Budapest is a UNESCO World Heritage Site that you should explore on foot. It is unquestionably the city’s most beautiful avenue, lined not only with trees but with upscale mansions, townhouses, and several embassies as well.

15. ​See the Statues on Heroes’ Square

The biggest square in Hungary was constructed to commemorate the country’s 1000th anniversary. Statues of Hungarian national leaders tell the story of the country’s history.

​This castle located by a beautiful lake in City Park gives you the impression of being in the Middle Ages even though it was only completed in 1908.  Across from the castle itself, you can see the statue of the Anonymus who wrote the most comprehensive chronicle of Hungary. The surrounding City Park is worth exploring on its own.

​The biggest and oldest indoor market in Budapest was constructed in the late 19th century and focuses on everyday Hungarian products. On the ground floor of the Great Market Hall, shop owners sell everything from fresh fruits and vegetables to Hungarian paprika and even pasta. The first floor is full of souvenir stalls and vendors selling traditional Hungarian embroidery.

​The Holocaust left countless homes and stores in Budapest’s Jewish district abandoned. Decades later, people converted these buildings into underground bars that are enjoyable even for people who don’t drink. The original ruin bar is Szimpla Kert which started the entire trend. It’s a great place to sip on a non-alcoholic cocktail and observe what is happening around you.

With so many people coming to Hungary’s capital for its cheap nightlife, visiting the ruin pubs is definitely one of the top things to do in Budapest.

​Where to Stay in Budapest

Now that you know what to do in Budapest you may be wondering where you should stay. The prices for accommodation in Budapest are quite reasonable which means you will be able to stay close to the major attractions. We stayed at an excellent Airbnb right in the center. The location made it possible for us to explore all Budapest has to offer without having to use public transportation even once.

Have you ever been to Hungary’s capital? Did I miss anything on this list of things to do in Budapest? Let me know in the comments!