8 Reasons You Should Visit Tirana 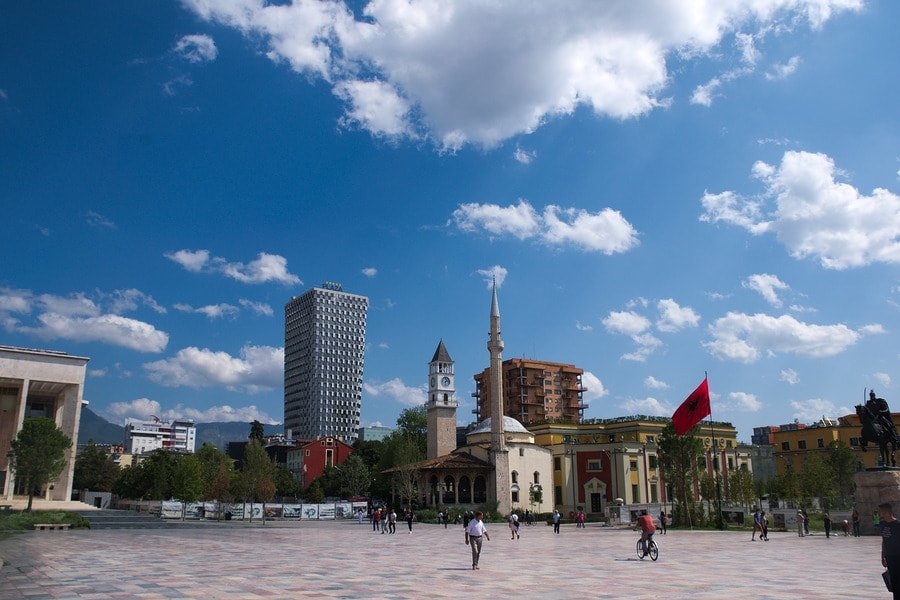 This past weekend, I traveled to a rather peculiar destination if you ask most Europeans: Tirana, capital of Albania. Due to the country’s isolation from the rest of the world for a large portion of the last century, many myths surround this country (also thanks to the movie Taken). People often assume Albanians are criminals who are active in the sex and drug trade. As a result, many people are afraid of traveling to Albania. But, surprisingly, it has become my favorite city in the Balkans.

But I found a decently priced flight from Athens to Tirana on Skyscanner. So I chose to make up my own mind rather than listen to people who have never been to Albania. I didn’t expect much but went to Tirana with an open mind. I was pleasantly surprised and have to say that I liked Tirana even more than other cities in the region. So here are eight reasons to visit Tirana.

Contrary to the stereotype of the Albanian mafioso, I’ve actually found Albanians to be exceptionally helpful and sincere. It started as soon as I exchanged money at the airport. I was informed by the clerk that the rates in the city are usually much lower. And he even advised me to only exchange a minimal amount of money.

It continued when the bus driver didn’t take advantage of the fact that I didn’t know the ticket price. Instead, he gave me back the exact amount of change he owed me. How could this not be my favorite city in the Balkans already?

​Albania’s decades of isolation stopped the development that took place elsewhere. Private cars did not exist until after the fall of the Communist regime. In order to be able to handle these cars, officials had to plan the construction of modern roads. These are in good condition. In fact, the streets in the city center were in much better condition than in Athens or even in Sofia. Furthermore, there are bike lanes which is something we can only dream of here in Athens.

Even the stray dogs are vaccinated and sterilized which is why they all have tags.

60% of Albanians are Muslim, 20% Atheist, 10% Orthodox Christian, and 10% Catholic. And Albania is the only country in the Balkans that doesn’t base its identity on religion. Albanians place their language first. If you speak Albanian you are Albanian, no matter your religion. Albania has never seen any sort of conflict between the different religious communities.

Because religion was banned under the Communist dictatorship, there are only a few religious buildings in the capital. And most of them are less than two decades old. So while there aren’t many historic religious buildings, you can see a new Catholic church, an Orthodox one, and a mosque within walking distance of each other. And this is another reason Tirana is my favorite city in the Balkans.

4. Albanians look to the future without ignoring the past.

Other Eastern European countries still struggle with their past. In Bucharest, I felt like people had not yet dealt with Romania’s Communist past. But they also didn’t seem to know how to move forward. When you visit Tirana things are different.

Albania clearly wants to become a part of the European Union. However, while Albanians are understandably upset about the years under the dictatorship they are not sweeping anything under the rug. Museums display the anti-fascist struggle without blaming the partisans for the government that followed. ​The National Art Gallery displays socialist realist art with a disclaimer on its role as propaganda. Most hauntingly, the offices of the former secret police, Sigurimi, are now a museum about the horrible realities of surveillance and torture in Albania.

​Albanians are aware that their country isn’t the most popular travel destination in the world. And so they are thankful to every traveler who chooses to visit.

Museum employees’ faces lit up when they realized I was not Albanian and asked curiously where I was from. They love the fact that people visit Tirana despite the negative stereotypes.

So instead of contributing to over-tourism in other cities, why not visit Tirana and give this lovely city a chance?

​Now, as I’ve only spent the weekend there I have only seen the center and cannot speak for the suburbs. But I felt safer than in other areas of Eastern Europe simply because there are always people around. If you’ve been to Athens, you know that it gets extremely dead on Sundays. But when you visit Tirana you will see people out and about going for walks with friends or family, having coffee on Sundays. The feeling of safety here definitely contributed to Tirana becoming my favorite city in the Balkans.

Edi Rama, the current prime minister of Albania, was mayor of Tirana from 2000 to 2011. As he was an artist before going into politics he thought of an excellent way to improve the cityscape. He had the gray communist style housing blocks painted in vibrant colors. Pink, yellow, green, purple, blue, there is no color that you cannot see on the walls of Tirana. This creates an impressive atmosphere of joyfulness in the city.

8. The Unbreakable Spirit of the People

Being half-Balkan myself, I believe we have a tendency to complain about the state of things but not actually do anything to change. I have found that Albanian people, more than anyone else in the region, refuse to let the circumstances define their reality. They make the best of what they have and continue on with life.

Ugly architecture? No problem, let’s add some color! Not many famous artists? Let’s just display propaganda art from the Communist era as a wake-up call for future generations. After private cars were made legal people had to buy the only cars that would work with tractor fuel.

Albanians have a strong drive to improving their situation and dealing with it in the best way possible. And this is another reason Tirana is my favorite city in the Balkans and why you should definitely visit.

Would you visit Tirana or other parts of Albania? What’s your favorite city in the Balkans?