The Best Things to Do in Bologna in 48 Hours 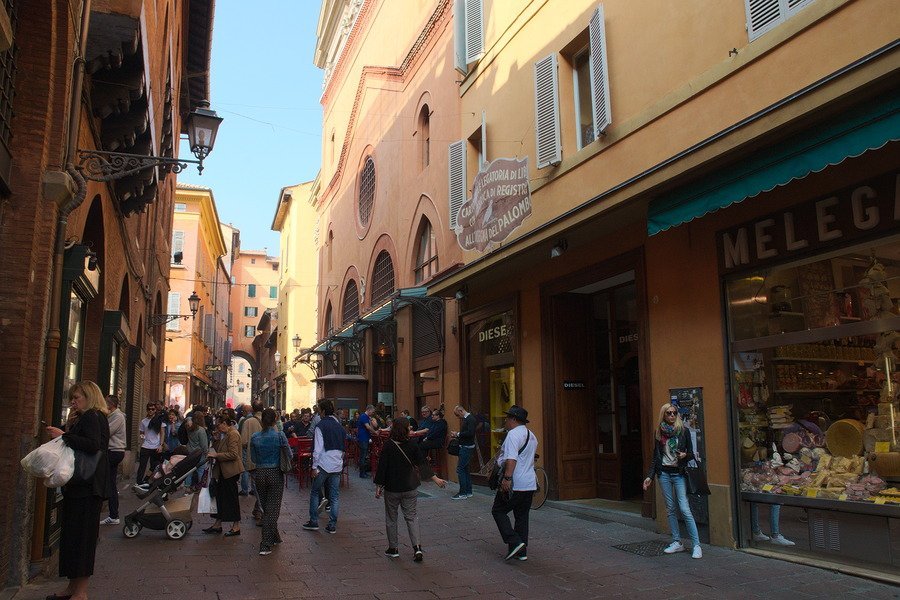 If you’re wondering what to do in Bologna in a weekend let me assure you that you can still see a lot of the city in about two days. Here’s a post on the most important things to do in Bologna if you only have a long weekend to explore.

As you know from my post on things to know before you visit Italy, I love this Mediterranean country and keep traveling there again and again. Bologna was the most recent Italian destination I visited. I had looked up some stuff, and, by the time I was on the short bus ride from the airport to my Airbnb, I had an idea of what to do in Bologna. Our flight had arrived very early, but our host was kind enough to let us check in right away. After checking in we only grabbed a quick vegan breakfast before going back to sleep for a bit.

After we woke up we decided to take a stroll through the city center. The red, and yellow tones of the buildings were an unmistakable reminder that we were once again in Italy. As Bologna’s old town is fairly small it’s possible to get around entirely on foot.

What was different from other Italian cities was that there were porticoes everywhere. It didn’t rain during our long weekend in Bologna, but even if you find yourself here in the rain these arcades will help you stay dry. They make walking around Bologna extremely inviting. In Bologna, you see people out and about a lot: on their way to on their lunch breaks, and on romantic walks after dark.

The combination of the colorful buildings and unique porticoes is why Bologna genuinely stands out from other Italian cities I have visited. And no article discussing what to do in Bologna could ever leave out a stroll through the city to marvel at the colorful architecture.

After all, it’s the red rooftops that led to Bologna being nicknamed La Rossa (the red one). The city’s other nicknames are La Dotta (the educated one, for the oldest European university) and La Grassa (the fat one, as it’s known in Italy for its extraordinary cuisine).

You’re probably wondering what to do in Bologna because the city is still much less touristy than nearby Florence and Venice. You may not have heard much about it in big travel magazines. But Bologna’s lack of masses of tourists made our trip so much more enjoyable.

Why You Should Visit La Rossa: There Are Lots of Things to Do in Bologna!

To be honest, I didn’t expect there to be a lot of things to do in Bologna. I found out that there were direct flights from Athens, and sometimes this is the best way to decide where to travel next.

I had never thought about what to do in Bologna when I found this direct connection. Actually, visiting Bologna hadn’t crossed my mind at all as opposed to cities like Rome, Milan, Venice, and Florence.

And I have to admit that I didn’t even know all that much about the city itself. I knew that it gave its name to the Bologna Process which helped standardize education across Europe, but that was it. And that doesn’t really help when you’re wondering what to do in Bologna.

But the good thing about not knowing much about a place is that your expectations aren’t too high, and you can’t really get disappointed.

So if you’re wondering what to do in Bologna let me assure you that you’ll enjoy the city a lot. And because I have been there I can tell you some of the reasons that make La Rossa a city worth visiting.

First of all, there are a lot of things to do in Bologna. While it’s not a very big city, it does have a significant student population so there are always events and all sorts of cultural happenings.

Secondly, as Bologna is also known as La Grassa, you could plan an entire trip around food. While the vegan restaurants were not as spectacular as in other European cities, I have a feeling this may have been due to the fact that a lot of restaurants were closed on the weekend.

The main reason to go to Bologna, however, is the beautiful architecture. There are many famous buildings you can visit in the city which all tell an important part of Bologna’s history.

How to Spend a Weekend in Bologna

I truly believe that about two days are perfect for La Rossa as it’s enough to see all the main sights but not so much that you might run out of things to do in Bologna.

So without further ado, here are my recommendations for what to do in Bologna, La Rossa.

What to Do in Bologna on a Weekend

Stroll Around the City

As I said, one of the main things to do in Bologna for a walk to marvel at the city’s architecture. You will see the famous towers in the center of the city and various palaces around the main square. The best thing about being here on a weekend is that the city center is closed for traffic on Saturdays and Sundays. That means you won’t have to worry about . Don’t think, however, that this means the streets will be empty. On the contrary, the people of Bologna make use of this pedestrian area, and you will see hundreds of people strolling around.

Get to Know the Area Around the Main Square

Bologna’s main square is surrounded by interesting architecture: from the Basilica di San Petronio, the Fountain of Neptune, to various palaces. There’s so much to see within steps from the main square.

Find out Why They Also Call Bologna La Grassa

According to an Italian restaurant ranking of 2017, the best vegan restaurant in all of Italy is right here in Bologna. We also went to a vegetarian restaurant and a place that offers meat, but their vegan options were fantastic. Check out my vegan Bologna guide for all the details.

Visit the Museums Inside the Palazzo Poggi

This beautifully decorated building houses various university museum collections on natural history, anatomy, optics, electricity, and other topics. The exhibited pieces give you a glimpse into how these sciences were taught at universities in the past.

Visit the Anatomical Theater in the Palazzo Dell’Archiginnasio

The entire building is well worth seeing, but you should also get the ticket for the anatomical theater to see where students in the past learned about anatomy while observing how their professors dissected human bodies. Be aware though that it was rebuilt after having been bombarded in 1944 so what you see is not original. This doesn’t make it any less intriguing, however.

The neighborhood around the university buildings has a lot of street art to offer. Aside from being full of students, Bologna is also a very left-leaning city so a lot of the street art here is political in nature which is an aspect that has sometimes been forgotten in today’s street art.

Explore the Seven Secrets of Bologna

Even if there are not a ton of world-famous things to do in Bologna, you can see some gems in the city. Try to find the seven hidden secrets of Bologna, for example.

Trying to find these obscure sights is a great thing to do when walking around the city. In the process, you will pass magnificent streets and beautiful buildings that you might otherwise miss.

People love to go shopping in Italy. As the city center is closed off for traffic on the weekends, your shopping experience will be much more relaxed. In my opinion, authentic Italian pasta is always a good (and useful!) souvenir from a trip to Italy.

We were fortunate enough to stumble upon a free concert of the Orchestra Giovanissimi del Conservatorio di Bologna. Italy is a great destination for the arts, but Bologna, in particular, is an important city if you like music because it is one of the UNESCO Cities of Music which means music has a very high status in the city. While we were there we saw a lot of small concerts on the streets.

Where to Stay in Bologna

If you only have a weekend you should really consider staying in the city center. It’s close to the airport, and you can reach all the things to see and do by walking. We found an Airbnb which was quite cheap for being in the center.

But since Airbnb is a controversial choice and it takes more effort to find a responsible choice you may want to opt for a hotel or hostel instead.

Tips for Making the Most of Your Weekend in Bologna

You will certainly have a great time if you choose to go to Bologna for a weekend. Although I am not saying that you shouldn’t go during the week. It will still be a wonderful city on other days, but as a student city, it comes to life on the weekends.

To Sum Things Up: 48 Hours in La Rossa Is a Perfect Amount of Time

Whether you’re visiting Bologna on the way to Florence or another Italian city, or are going there for itself, you will certainly find that La Rossa is worth a visit. There are things to do in Bologna, and it’s suitable for art buffs, food lovers, and people who want to have fun. Don’t make the mistake of overlooking this quaint Italian city.

Have you ever been to La Rossa? What are your favorite things to do in Bologna?