Why It’s Not Ethical to Ride a Donkey in Santorini, Greece 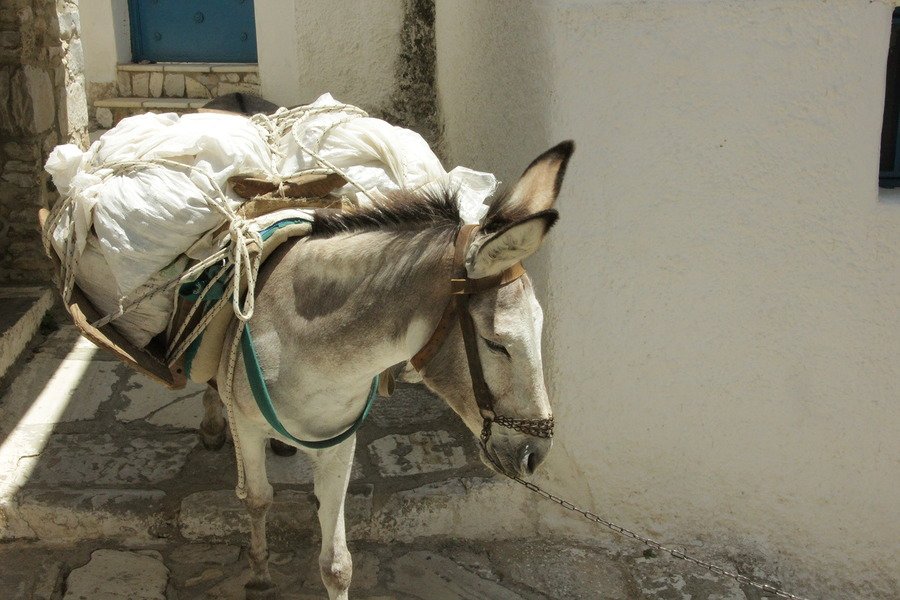 They have big eyes with long lashes. They’re smaller than we are and quite friendly. As you walk through the narrow alleys of the Greek islands you can often hear their characteristic braying.

Many tourists in Greece and other countries choose to ride a donkey.

But what makes people think it’s okay to ride a donkey? Can you ride a donkey simply because it’s an experience that is sold to you?

Why do we still believe that exploiting animals is acceptable?

We tend to think of animals as being on this planet to feed us, entertain us, and work for us.

And this is based merely on the fact that we are more powerful.

Why You Shouldn’t Ride a Donkey

More and more people are starting to realize the cruelty of riding elephants in Thailand. But far too often, tourists from Western countries focus on animal exploitation in Asia and Africa only to happily go on horse-drawn carriage rides in European cities and ride donkeys or mules in Greece. Can I ride a donkey and then criticize elephant riding?

Because at the end of the day these things are not so different from each other. Can people ride donkeys that have not been broken? No!

Or do you really believe that horses, mules, and donkeys walk up to people wanting to be ridden while only elephants have to be broken? Throughout history, humans have used many animals to carry goods as well as ourselves.

The animals they have chosen as so-called beasts of burden differ from region to region: camels, elephants, mules, donkeys, and horses. But being accustomed to seeing one species used in such a way doesn’t mean it’s better than using any other species for the same purpose.

Thinking that what we are used to is good and what other cultures do is bad is a very dangerous mindset.

We can see it right now during the COVID-19 pandemic where people blame Chinese culture for the consumption of wild animals while being perfectly fine with their own cultures’ consumption of domesticated animals.

Why do people ride donkeys at all? Donkeys are still used as a means of transportation in some Greek villages and islands. Santorini, one of the most popular tourist destinations, is particularly well-known for this as it was created by a volcanic eruption and many people don’t want to walk up the steep cliffs.

Another example is Hydra, an island close to Athens where vehicles are not allowed. A cruel donkey ride is often one of the first things people do on the island.

It has always upset me to arrive in Hydra and see all the donkeys lined up in the heat of the summer sun waiting for the next tourist who desperately wants to ride a donkey in Greece. When you ride a donkey the animal has no choice in the matter and has to carry you in temperatures above 40°C. Can donkeys be ridden ethically in such circumstances?

And while there may be people riding donkeys because they depend on them as a means of transportation (if they have difficulty walking and aren’t allowed to use a car), this doesn’t excuse tourists from riding a donkey for fun. Those of us who are privileged enough to travel for leisure must put in the research to find alternatives.

In Santorini’s difficult terrain you can either walk, ride a donkey or mule, or take a cable car. Many tourists choose to ride a donkey. And this also affects the local population negatively. Even people who don’t care about animal rights complain about the donkey feces and urine everywhere. That doesn’t sound like the picturesque images of Santorini that you have seen, does it?

But what’s more is the well-documented animal abuse that you support when you decide to ride a donkey in Santorini.

Because from donkeys being hit, to tied to a wall in direct sunlight without water, these animals get mistreated all day. There are many photos and videos of donkeys with open wounds all over their bodies, especially under the ill-fitted saddles. I’ll let you do a quick search for these images yourself.

Other people have reported donkeys falling over from the weight of the goods they have to transport only to be hit and abused further. When you decide to ride a donkey you pay for this animal abuse even if the owners tell you the donkeys are fine. Can you ride donkeys and simply ignore this issue?

Fat-Shaming Is Not Helpful

More and more people are speaking up against this mistreatment of donkeys and mules. And that’s great except for one thing.

There’s a lot of fat-shaming going on which isn’t helpful at all. Those who focus on the weight of the tourists riding donkeys seem to think everything that goes on before and after the ride is fine. But it’s not.

Riding animals is cruel because it’s not something they naturally want to do. They have to be broken to accept a human on their backs. And what sounds like an innocent training process goes completely against the animal’s nature. This is not made better or worse by the weight of the person who will eventually ride the animal.

When Will It Stop?

The owners will always let tourists ride a donkey if it makes them money. Even if people have to pay fines, they make more money from tourists who want to ride the donkeys. In Santorini, donkey owners even get a percentage of income from the cable car, an agreement that made it possible for the cable car to be built. So the owners don’t rely on the donkey rides, but they continue because tourists pay for them. You can definitely still explore the island without a donkey. Check out this guide on things to do in Santorini that doesn’t include a donkey ride.

When we were in Jordan, we saw signs throughout Petra with phone numbers to call if you thought any of the animals were abused. But since people continue to ride animals or carriages there is simply too much money to be made from exploiting the donkeys and mules.

The only two solutions to this are an outright ban of the practice or a boycott by tourists. As governments are not willing to step in, the responsibility lies entirely with the tourists. Sadly, it will still take a while until all tourists are educated and compassionate enough to say no to the prospect or riding an animal.

Animal abuse happens all over the world. It’s not better because it happens to animals that you have accepted to see as beasts of burden. In a country like Greece with stunning beaches, archaeological wonders, and perfect weather, there is no need to ride a donkey and support animal cruelty. You can have a much better trip walking or taking other means of transportation.

To help some of the Greek donkeys please check out the Agia Marina Donkey Rescue on the island of Crete. They always need donations to pay for food and vet visits. You can even visit or adopt a donkey. If you’re vegan check out my extensive guide to being vegan in Greece. And if you want to support vegan businesses when you’re in Greece move straight on to my vegan restaurant guide to Athens. Plus, don’t forget to check out my seven tips for vegan travelers.

Do you try to avoid animal abuse when you travel? And would you like to go to Greece? If you do I hope you will not participate in cruel donkey riding.