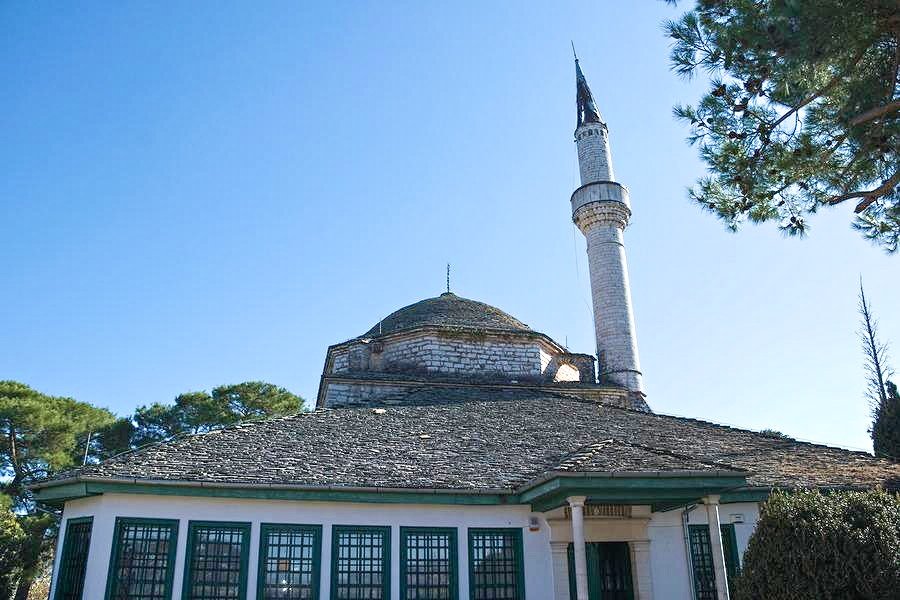 If you search the internet for things to do in Ioannina, Greece you’ll be surprised by how much there is to see in this Greek town that many foreign tourists have never even heard of. And that’s especially true for the Islamic history in Ioannina. Or did you know that Ioannina had some of the best-preserved Islamic heritage sites in Greece? The entire region of Ioannina has so much to offer that we spent four days there and still didn’t see everything.

From the gorgeous Zagori area with its picturesque villages and monasteries to the archaeological site of Dodoni which hosts the oldest Hellenic oracle, there is so much to see that it puzzles me that international travelers continue to overlook Ioannina.

Islamic History and Muslims in Ioannina

And I haven’t even mentioned the stunning Vikos Gorge yet. But what’s most interesting is perhaps the Islamic history in Ioannina. After Greece gained its independence many Islamic heritage sites in Greece were destroyed, but Ioannina preserved some of it so we can still explore the lives of Muslims in Ioannina today. After four centuries of Ottoman rule, those Islamic heritage sites in Greece that still remain tell an important part of the country’s history. And even non-Muslims will find this aspect of the history of Ioannina quite interesting.

One of the most important people in the history of Ioannina was Ali Paşa who ruled large parts of Albania and northern Greece from 1788 until his execution in 1822. A lot of Islamic history in Ioannina is tied to his rule. During that time, the population of Jews and Muslims in Ioannina almost equaled the Christian population. So here are some of the sites you should visit if you want to learn more about Islamic history in Ioannina and Islamic sites in Greece.

​Ioannina’s old town is contained within the walls of the Byzantine fortress and is absolutely stunning. Walking through the alleys is a must if you want to learn more about the history of Ioannina. It is wonderfully peaceful with fewer cars than the rest of the city and has a distinct Ottoman character. As you enter through one of the gates you leave the noise behind and step back into the past. The Jews and Muslims in Ioannina generally lived in this part of town after a Christian revolt led to Christians being banned.

Ioannina’s old town is also referred to as Ioannina Castle and was initially constructed during Byzantine times which tells you something about how far back the history of Ioannina reaches. Strictly speaking, it’s not one of the Islamic sites in Greece. But it was under Ali Pasha that the inner castle was completely rebuilt and received its current character. It’s an essential place to visit if you want to learn about Islamic history in Ioannina and features some of the most important Islamic heritage sites in Greece.

An important building to understand Islamic history in Ioannina is the Aslan Paşa Mosque. The mosque dates back to the early 17th century and originally included madrasas and a mausoleum. Outside the building itself, you will see the remaining tombstones of the former Ottoman graveyard for Muslims in Ioannina. The mosque is one of few Islamic sites in Greece that have not been destroyed, and you can even see the mihrab and minbar making it one of the most impressive Islamic heritage sites in Greece. But today the Aslan Paşa Mosque houses the Municipal Ethnographic Museum Ioannina and displays the Jewish, Christian, and Islamic heritage that are so essential in the history of Ioannina.

The Fethiye Mosque was built in the 15th century after the Ottoman conquest but was initially made of wood. In the 17th century, it was replaced with a stone building, but it was further restructured in the late 18th century and the main mosque for Muslims in Ioannina. Ali Paşa’s tomb is located right outside the mosque. It is one of the best-preserved Islamic heritage sites in Greece.

The Museum of Ali Paşa

The Museum of Ali Paşa can be found on the Islet of Ioannina located in Lake Pamvotida which you can reach by boat. On display are several objects belonging to Ali Paşa or related to his reign from 1788 up to his assassination by the Ottoman government in 1822. He died in the very monastery that now houses the museum, and you can even see the bullet holes.

The clock tower of Ioannina was built in 1905 in honor of Sultan Abdul Hamid II and is one of the less obvious Islamic sites in Greece. It was damaged during a parade in 1922 and transferred and rebuilt in its current location in the modern center of the town in 1925. The clock tower combines different architectural styles but reminded me a bit of the clock tower in Tirana although it was constructed much later.

But perhaps it’s not that surprising – after all, Tirana and Ioannina are a mere 300km apart and were located in the same country at the time. There are several reasons to visit Tirana so you could combine a trip to Ioannina with a visit to Albania’s capital as well as Gjirokaster with its UNESCO World Heritage site.

Other Things to Consider on Your Trip to Ioannina

The area around the lake is particularly beautiful. Despite the fact that we went at the beginning of November, not all the leaves had changed colors yet, and I would assume that a trip a bit later in the season would make for a spectacular scenery. The lake is very vast, and the area surrounding it lends itself to quiet walks.

Are you traveling to Ioannina as a vegan? Then you absolutely must check my vegan guide to Greece before going so you know how to order vegan food.

Note that the lake causes a lot of humidity so it will be quite chilly if you go in fall or spring. On the other hand, in the summer there might be a mosquito problem. Ioannina is also known throughout Greece as a very rainy city, but we were lucky and didn’t experience any rain even in November. Do bring an umbrella though to be safe.

And for a less pleasant topic, bathrooms in Greece can be a little bit shocking so read my post on the subject to be prepared.

When Are You Going to Explore the History of Ioannina?

As much as people may say that Islam doesn’t belong to Europe, it actually has a history that spans many centuries on this continent. Overlooking the Muslim contributions to European cultures doesn’t do history justice. Conscious travelers who are interested in cultural travel should make an effort to dig deeper into the many ways in which Islamic history is actually European history as well. So take some time and explore the Islamic sites in Greece when you come here.

Have you seen any Islamic sites in Greece or elsewhere in Europe?