How to Be a Happy Vegan in Rome: 17 Spots to Visit 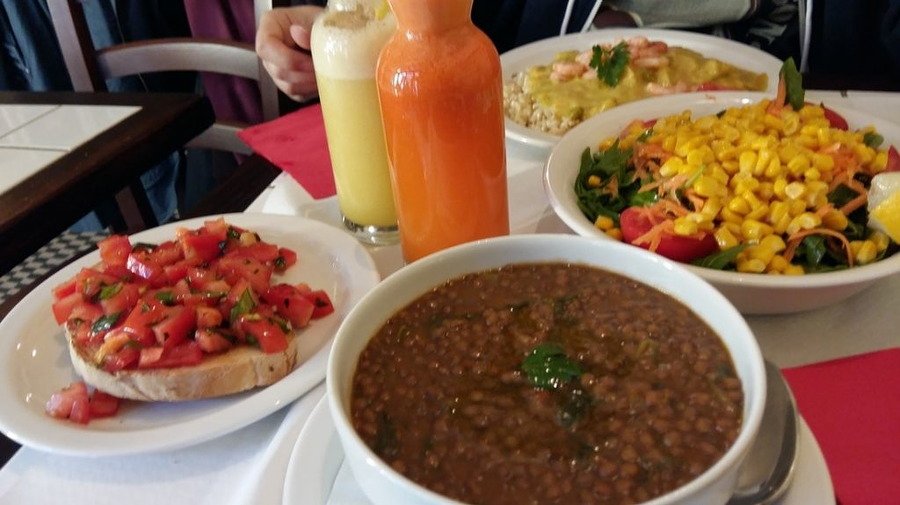 As you know I was recently in Rome. Before flying to Rome, I checked for vegan listings on HappyCow. I got quite a few results and thought it would be easy to find food as a vegan in Rome. But the problem was that most of the vegan restaurants at the time were a bit far from the city center. Since then, some centrally located places went vegan and some new places opened. But in late 2016, the vegan landscape in Rome looked a bit different.

As we already didn’t stay close to the center, I didn’t want to waste time during our short stay to go to an all-vegan restaurant. Given that Italian cuisine is generally quite accommodating to vegans we wanted to try the non-vegan places. That’s why we went to places that all had vegan options but were not strictly vegan, or even vegetarian.

Even walking around the city which is one of my favorite things to do in Rome, we saw a lot of places with signs indicating that they offered vegan options. That didn’t surprise me considering that a lot of plant milks and other vegan products are produced in Italy.

So given that we only went to non-vegan places, I think this is the perfect guide for vegans who travel to Rome with a non-vegan. Sometimes, non-vegan travel partners are not too keen on trying vegan or vegetarian restaurants. So it’s good to know how to get by in non-vegan eateries.

But first, let me tell you about my favorite vegan spot in Rome. Vegan Store is a stall in Testaccio market and has pretty much everything a vegan mini market should offer. Barbara gave us some chickpea cheese to try which was absolutely amazing. Italian cheeses are some of the best in the world. So, naturally, Italian vegans have come up with high-quality vegan substitutes. The cheese we tried and later bought was from Tuscany and had a really nice and intense taste. We also tasted some vegan ham and salami and had two panini made by Barbara which we ate right away.

Barbara told us that the market used to be a slaughterhouse and that several other store owners assaulted her. But she continues to try and educate the locals about the injustices done to animals.

We also took some fresh banana bread with us which we ate at the Orange Garden.

Since the cheese and salami were really delicious we decided to buy some to eat at home.

Barbara also gave me a list of places to check out in Rome, but we didn’t end up going. As mentioned before, the vegan places were a bit far from the center. And I was not willing spending an hour on public transport out of the few days we spent in Rome.

I highly recommend Barbara’s Vegan Store to any vegan who visits Rome.
Stall 83 at Mercato di Testaccio. Open Tuesday to Saturday 8:30 am to 2:30 pm.

The second day we went to a cozy little bistrot really called Tiepolo. They advertised vegan options in the window so we simply went for it without checking any reviews. I had a bowl of very nice lentil soup, fresh juice, a tomato bruschetta, and a salad. The lentil soup was quite thick, so it was very filling and perfect for a cold winter day. The staff at Tiepolo were very friendly. And the décor was super cute.
Via Arenula 43. Open Monday to Sunday 12 pm to 2 am.

As the prices at Tiepolo were good we actually went back a second time. I had another lentil soup and some guacamole and hummus with bread. The guacamole would have needed more flavor, to be honest. But then why did I feel the need to order guacamole in Italy in the first place?

Tiepolo was probably our favorite eatery in Rome. I highly recommend it to other vegans traveling to Rome with non-vegans as they offer really good value for money.

For dinner that night, we went to a place called Casetta di Trastevere which a friend had recommended. A very cozy place with really decent food but awful bathrooms. I had another tomato bruschetta and the penne all’arrabbiatissima because I like spicy food. I would have wanted the pasta to be a bit spicier, but it was quite good nonetheless. We went back to Casetta di Trastevere again a few days later because it was good value for money.
Piazza de’ Renzi 31a.

Another place in Trastevere we tried out was Carlo Menta. I had the marinara pizza because it was the only vegan pizza they had. It was decent, but I’m not really a fan of Roman-style pizza. Having been to Naples twice and having experienced the ultimate pizza there (before I went vegan) my standards for pizza may be too high. The super-thin crust they use in Rome is not for me. But some people prefer this type of pizza so try it and make up your own mind. At least it’s possible to find pizza as a vegan in Rome.
Via della Lungaretta 101. Open Monday to Thursday 12 to 11:30 pm, Friday to Sunday 12 pm to 12 am.

One night, we simply wandered around in Trastevere and ended up in a place called Cave Canem. It was pretty cold there, and again, there were not many options for me, but the food was decent. Nothing special, though, there are better places to eat vegan in Rome. And I would avoid going there in the winter as it was really not cozy due to the cold.
Piazza di San Calisto 11. Open Monday to Saturday 6 pm to 12:30 am, Sunday 12 pm to 12:30 am.

Too late during our stay, I found out that a bakery called Caffè Trastevere offers vegan croissants and other pastries. Because if you’re a vegan in Rome you want to try some pastries as well. While the croissants were not amazing, I am always happy to see that more places are offering vegan options. (By the way, I had the best ever vegan croissants in Bologna.)
Viale di Trastevere 50.

Now that my partner and I are both vegan we’d probably stick to exclusively vegan restaurants in Rome on our next trip. There are several amazing options that I’m really curious about and that I think you should absolutely try if you’re vegan in Rome. Some of these are not very centrally located which was one of the reasons we skipped them.

Ecru: The main reason we didn’t hit up this vegan restaurant was that I’m not a big fan of raw restaurants, but seeing as how this is one of the best-rated vegan restaurants in Rome I think it’s probably a must if you’re a vegan in Rome. Via Acciaoli 13. Open Monday to Saturday 1 pm to 10 pm.

iVegan: This is a vegan supermarket where you can either buy tons of vegan products if you want to self cater, or get some freshly made foods like sandwiches, burgers, wraps, hot dogs, salads, and even desserts. Via Angelo Emo 125/129. Open Monday to Friday 8:30 am to 8 pm, Saturday 10 am to 8 pm.

Le Bistrot: This restaurant only went vegan in 2018 so wasn’t really on my radar when I visited. The food is Italian and gets really good reviews from vegans. The restaurant is quite nicely decorated judging by the photos. Via delle Sette Chiese 160. Open Monday to Sunday 8 pm to 11 pm.

Ma va’: This is another highly-rated vegan restaurant in Rome. The food is Italian and looks absolutely delicious. Via Euclide Turba 6. Open Monday to Saturday 12 pm to 3 pm, 7 pm to 11 pm.

Ops: This is a vegan buffet with really delicious looking food and great reviews. You pay by weight. Via Bergamo 56. Open Monday to Sunday 12 pm to 3 pm, Tuesday to Sunday also 7 pm to 10 pm.

Radagast Vegan Bakery: This fully vegan bakery makes sandwiches as well as tons of sweets. The cakes and muffins look super yummy, and the reviews are excellent. Via Teano 309. Open Monday 2 pm to 8 pm, Tuesday to Friday 9 am to 8 pm, Saturday 10 am to 8 pm, Sunday 9 am to 1 pm.

Romeow Cat Bistrot: This vegan cat café offers amazing looking food in a cozy atmosphere with several cute cats around. Remember to give them their space and let them come to you if they want some affection. Too often I see people in cat cafés going a little overboard with the cats. Via Francesco Negri 15. Open Tuesday to Sunday 11 am to 11:30 pm.

So What: This casual vegan restaurants mainly offers veganized Italian dishes but also creates international dishes like curries sometimes. The reviews make it look like this place is a little bit hit-and-miss, but the overall ratings are pretty good, so I’d probably be curious enough to try this out as a vegan in Rome. Via Ettore Giovenale 56-58. Open Monday 7:30 pm to 11 pm, Tuesday to Friday 9 am to 11 pm, Saturday and Sunday 12:30 pm to 2:30 pm and 7:30 pm to 11 pm.

Veg Joy: This place went vegan in 2019 and only offers takeaway. Everything looks really tasty, and the reviews are also really good. Via Vasto 4. Open Monday to Wednesday 11 am to 9:30 pm, Thursday to Saturday 11 am to 10 pm.

Vegan Food Tour: I have to admit that I still haven’t joined a vegan food tour, but perhaps I can do so next time I visit Rome! The vegan food tour gets excellent reviews and takes you on a guided walking tour through the streets of Rome, stopping for vegan food to give you an introduction to the vegan food scene in the city. A must for any vegan in Rome.

Grezzo Raw Chocolate: This vegan, organic, and raw store store offers chocolates, ice cream, and cakes in the center of Rome. Everything looks super elegant and delicious. Via Urbana 130. Open Sunday to Thursday 12 pm to 7:30 pm, Friday and Saturday 12 pm to 11 pm.

Olive Dolci: If it hadn’t been winter I definitely would have wanted to have ice cream while in Rome. This fully vegan ice cream place also offers cakes. The reviews are outstanding, and it’s not too far from the Colosseum so you could combine a visit. Via Emanuele Filiberto 140. Open Monday to Sunday 10 am to 1 am.

L’Offici Naturale: Finally, if you’re looking for vegan and cruelty-free beauty products this shop in the Jewish neighborhood has got you covered. Via della Reginella 3. Open Monday to Sunday 10 am to 8 pm.

Overall, the number of vegan options all over Rome impressed me. At the train station and the airport, it was easy to find vegan options. I even saw a few listings for vegan ice cream places. But since it was winter and quite cold I didn’t really feel the need to try any of them. It’s not too difficult to be vegan in Rome even at non-vegan places.

What is your experience with vegan Italian food? Have you ever tried artisanal vegan cheese? Any other tips for eating vegan in Rome?