The Absolute Best Places to Eat Vegan in Corfu, Greece

I first traveled to Corfu in the summer of 2016. It was my first trip as a vegan after many years of being vegetarian. I realized that it would be a bit difficult to be vegan in Corfu. To make it easier for you to find vegan food in Corfu I listed all the options I found. After going back to Corfu in the fall of 2018 I updated this so that it’s still relevant.

Being Vegan in Greece

Greece is not a particularly vegan-friendly country. “But there are so many Greek vegan dishes,” I hear you exclaim. While that may be true with regards to side dishes, Greeks love their meat, dairy, and eggs. You can definitely find vegan Greek recipes but it’s difficult to find vegan main courses at Greek restaurants. And, let’s be honest, living off of salads and starters isn’t exactly satisfying. Add to that the fact that veganism is fairly new here. So people are not familiar with the idea of not eating animal products.

Maybe you have Greek friends who tell you that during Greek Lent you will find an abundance of “vegan” dishes. But fasting food may contain seafood and honey, and is, therefore, not necessarily vegan. You should always check the exact ingredients in a dish in order to avoid unpleasant surprises. Even Athens, a city with a population of several million, did not have a vegan restaurant until late 2016. (By the way, if you are heading to Athens make sure to check out my extensive guide on vegan restaurants in Athens, Greece.)

With that in mind, I was curious about what it would be like to be vegan in Corfu, a Greek island.

The Best Place If You’re Vegan in Corfu

As luck would have it, the first place I went to was also the most impressive. Rosy’s Bakery is a small pastry shop in the old Jewish quarter of Corfu Town. Rosy is a sweet Jewish lady who has been offering vegan, gluten-free, sugar-free, but also regular pastries for many years. She knows exactly what veganism is and can tell you which of her sweets are vegan.

Rosy makes the best baklava I have had in more than four years of living in Greece. Having Bulgarian-Turkish roots, I take my baklava quite seriously and have been hugely disappointed by the baklava in Greece. It is often way too dry and boring. Even Germany offers more diverse types of baklava than Greece. But then I tried Rosy’s vegan baklava – and everything was fine again. You absolutely have to try it!

Some of the sweets contain the local citrus fruit kumquat, which isn’t really my thing. It tastes both sweet and sour, but for an authentic experience, you should try it at least once.

We went back to Rosy’s Bakery several times because everything was so good. And we even took a huge amount back home to Athens with us. Rosy’s Bakery is one spot you can’t miss if you’re a vegan in Corfu.

A Reason to Go Back to Corfu

Rosy’s pastries are so good that I flew back to Corfu in 2018 for a long weekend for her amazing baklava. I’d go as far as saying that if you’re vegan and not sure which Greek island to visit I would suggest Corfu simply for Rosy’s baklava.

I’ve seen some comments on HappyCow regarding the prices, and the first thing Rosy said to us was that things would be a bit expensive. While the prices are not the same as in the baked goods section at the supermarket, the supreme quality, by all means, justifies the prices. This is part of a much bigger discussion about what we are willing to pay for good quality, and how big companies keep their prices extremely low and destroy small businesses. Rosy’s Bakery is a small family-run business that is open more than twelve hours a day, seven days a week. Keep that in mind when asking about the prices.

There are two locations within a few meters from each other, and you will find either Rosy or her daughter Oretta behind the counter. They speak Greek, English, German, and Italian (maybe even more languages?) so communication will be easy.
Palaiologou 37 & 71, Corfu Town. Open Monday to Sunday 10 am to 11:30 pm.

Where to Eat Vegan in Corfu

But let me assure you that vegans will not have to live off of sweets alone.

Not far from the bakery, at the Town Hall square, you can find Pane e Souvlaki. Don’t be misled by the name, there is nothing Italian about this tiny place; it’s just that Corfu was under Venetian rule for centuries, so there is a strong Italian influence on the island. The few times we went here, I chose the tabbouleh and the falafel. They were decent and filling enough. But I used to live in Montreal which has a large Lebanese community. So I have had better.

The best thing about Pane e Souvlaki is definitely the location. The Town Hall square is beautiful, especially at night. The interior of the place is very pretty but small, and because of the wonderful weather we always sat outside. Due to its size, Pane e Souvlaki is usually full. And we have seen a pretty impressive amount of people waiting for a table, many of whom were locals.
Gilford 77, Corfu Town. Opens Monday to Sunday at 12 pm.

The last day we visited Rosy, we simply asked her for suggestions on vegan food rather than going back to Pane e Souvlaki. Rosy recommended a small family-owned tavern called To Diporto. We had a look at all the options, and they told us exactly which ones were vegan. I chose a dish with black-eyed peas which was good and quite filling. If you want traditional Greek food as a vegan in Corfu, this is a great option.
Palaiologou, Corfu Town.

If, at some point on your trip, you go to Prasoudi beach you can have vegan food there as well. There are only two restaurants/bars there. It’s quite a difficult beach to get to but well worth it. When we were hungry we went for the place with the better view. The owner was very helpful in letting me know what vegan options they had. The food was decent but totally overshadowed by the incredible view.

Taking a stroll through Corfu Town, we walked past an ice cream place that offered vegan options. Needless to say, I had to try it, and it was surprisingly good. It was not too sweet and tasted really good. Unfortunately, I don’t remember which flavors I had, nor, and this is much worse, the name of the place. If anyone knows them, please leave a comment with their name.

In 2018, there was a new vegetarian café in Corfu called Aubergine Café. I had to go there for breakfast the morning I arrived. Unfortunately, the only vegan breakfast option was a “fruit salad.” It ended up being a few slices of fruit which were definitely not worth the 5 euros I had to pay. I didn’t go back as I self-catered for the next days, but it’s possible that their lunch and dinner options are better.
Kapodistriou 110, Corfu Town. Open Monday to Sunday 8 am to 11:30 pm.

Self-catering is the best option if you’re vegan in Corfu. For groceries, we went to the local supermarket, Dimitra. And we were surprised by their vegan and organic options. Because despite the small size, it had more options than many supermarkets here in Athens. We were able to get vegan muesli and plant milk, so breakfast was easy. They also had soy mince which we used to make pasta with a bolognese sauce.

My last vegan tip for Corfu is unrelated to food. The olive soap factory of Patounis has been around since 1850 and the Patounis family still owns it. They manufacture four types of olive soap: pure olive oil soap, green olive soap, olive palm soap, and laundry soap. Before my first Corfu trip, my sister had seen a documentary about some of the Greek islands. She heard about the Patounis soap factory and asked me to get her the green olive soap.

The factory still looks like one would imagine it to have looked in 1850. It is a very charming place with a friendly owner. They offer daily visits through the production facility. The first time we went to Corfu we missed the tour. But on my second trip to Corfu, I observed part of the soap-making process. It was very interesting to see the traditional production of such a pure soap. You can buy Patounis soaps and other local items at the factory. For example, I bought a bottle of local olive oil for my dad on our first trip. No need for cheap souvenirs!

All soaps are vegan. The owner even explained to me that for the guidelines when cutting the soap, they don’t use carmine in order for the soap to be vegan. The guided tours take place Monday to Saturday at 12 pm, and it’s well worth your time if you’re a vegan in Corfu.
Ioannou Theotoki 9, Corfu Town. Open Monday to Friday 9 am to 5 pm, Saturday 9:30 am to 2:30 pm.

In conclusion, while Corfu is by no means a vegan paradise, it has some lovely options, most of all Rosy’s fabulous pastries. It’s definitely worth a visit, with its beautiful old town and stunning beaches. There are so many things to do in Corfu, and I’m sure you’ll have a great time. If you’re a vegan in Corfu, you won’t have major problems, as there are restaurants where people understand what vegan means. But the best choice is to self-cater for most of the trip and indulge once or twice. 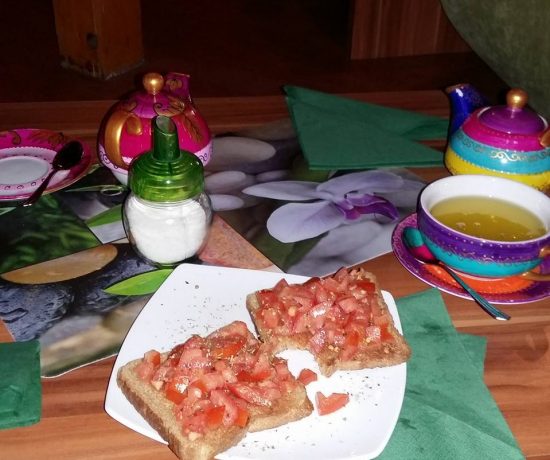 How to Survive as a Vegan in Bucharest

Being Vegan in Malta: The 4 Best Spots + Tips