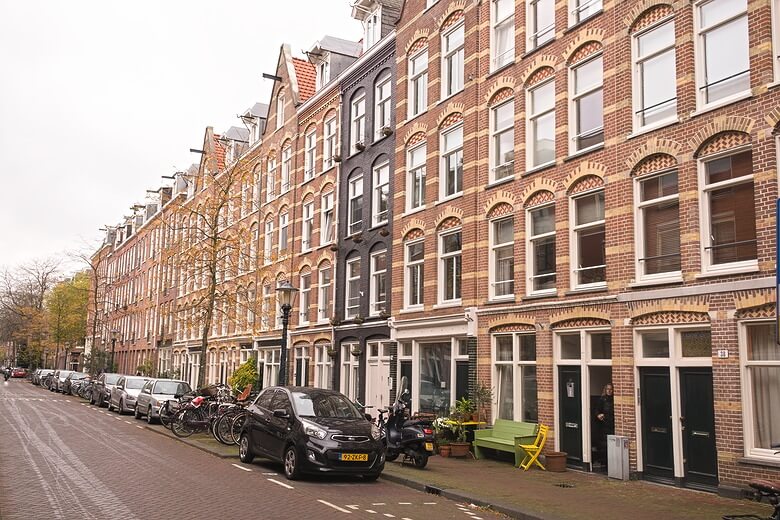 It’s been about a month since I registered as a resident of the Netherlands. I can now call Amsterdam home although that term hasn’t really meant much to me ever since my mid-20s. I live in Amsterdam-West, more precisely in the Staatsliedenbuurt, a neighborhood close to Westerpark.

I’ve been moving quite a lot in my adult life, including to different countries. It may not be that much to some, but I’ve lived in Germany, Canada, and Greece.

Amsterdam doesn’t feel too foreign so far because it’s very similar to Hamburg. And I’ve already had a friend and her daughter visit as well as my mother – so that automatically gives the city a more home-like feeling.

Living here is actually the best of both worlds because Staatsliedenbuurt has lots of the pretty 20th-century buildings you expect to see in Amsterdam but without the masses of tourists. There aren’t any souvenir shops or guided tours in this part of the city. Check out the view from my apartment window:

Staats (as it is informally known) may not be the trendiest neighborhood in Amsterdam, but the people here sure are friendly. All the shop owners in the neighborhood are really helpful, and so are the neighbors! And the missing trend factor means that rent here is still more affordable than in the center. And then we’re even spoiled with the amazing Westerpark and all its cultural offerings at the former gas factory (Westergasfabriek). How pretty can factory buildings be?? Definitely prettier than most apartments I’ve ever lived in.

If that wasn’t enough, my favorite form of public transport in the city is the tram, and we have one. And no, I’m not taking a bike for now. Perhaps in spring, I’ll think about it, but I don’t have the space to store one, and bikes tend to get stolen a lot here.

As for the park, it’s perfect for walks. And I’ve been told that locals actually prefer it to the hipster meeting place that is Vondelpark. In any case, the mere fact that there’s quite a large space of greenery within walking distance is such a life upgrade. I’ve already spotted several grey herons on my walks.

And although I find it a bit early they seem to have already put up the neighborhood’s Christmas decorations. It’s nothing special, but still kind of cute.

What I really love about the area is that it has absolutely everything I could possibly ask for. From a bakery, supermarkets, and drug store, to eateries with vegan options, as well as bars and cafés – even a fully vegan café as well as a bar that offers vegan dinners once a week, I wouldn’t even have to leave my neighborhood for anything. Then there are gyms, yoga studios, beauty salons, and a movie theater. Need I say more? So there you go, a little tour of my new neighborhood. I’m not sure yet how long I will live here, but I look forward to making the most of my time here.

What do you think about my new neighborhood? Have you ever been to this part of Amsterdam?